Support Don’t Punish (SDP) was created in 2011, and the original idea behind it was to address the main challenges that the HIV response was facing in regard to people who use drugs (PWUD). The Support Don’t Punish project set out to tackle lack of access to health and welfare services, implement harm reduction strategies, and fight back against policies working to criminalise, ostracise, and marginalise PWUD. The SDP campaign aimed to promote the mobilisation of communities to address those obstacles, to change the stigmatising narratives and laws that create them, and to promote participation and accountability. The campaign has now evolved to have the aim of ending the epidemic of incarceration for drug offences, of untreated pain, violence against growers, policing marginalized groups.

The SDP campaign is run by IDPC, with other organizations also acting as hubs for the campaign, including Youth RISE. The Global Day of Action is the high point of the campaign, on the 26th of June every year. Around the world, we mobilise to bring attention to these issues under a common banner. The 26th of June is the UN International Day Against Drug Trafficking and Drug Abuse, and historically on this day, governments use the day to showcase their ‘successes’, in terms of the War on Drugs. In response, we organise to create a counter narrative to the one of punishment and violence, with over 1000 activities taking place in 110 countries. Here are some of the activities undertaken on the SDP Global Day of Action this year, by some of our International Working Group members and their affiliate organisations. 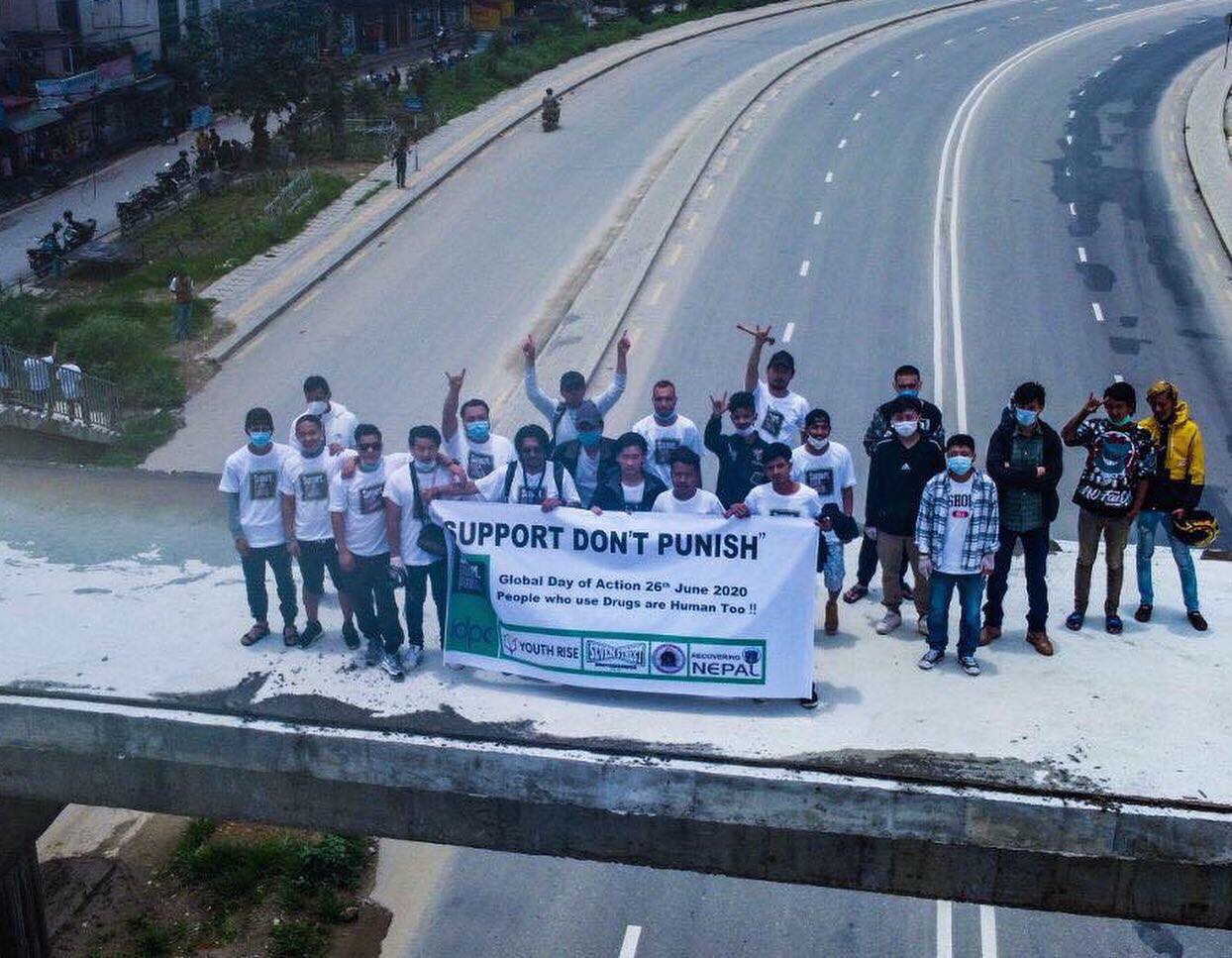 Our International Working Group member Sandeep, with Youth RISE Nepal, successfully hosted an event this year to endorse the Support Don’t Punish Global Day of Action. On June 26, Youth RISE Nepal collaborated with other organisations to create a series of events which included a video projection about drug use in Nepal and the Asia Pacific Region with orientation program about harm reduction for young people who use drugs. This session was held in the presence of a few local government officials, as well as other stakeholders, and security personnel. The participants received a token of love from the event at the closing ceremony. There was also a demonstration in which the Support Don’t Punish banner was held on a flyover bridge in the city.

Eliza, our IWG from Lithuania and a member of Jauna Banga (Young Wave) held a very productive Support Don’t Punish campaign this year, with a week of campaigning. Eliza released an article on the Eurasian Harm Reduction Association (EHRA) page, titled “Support. Don’t Punish” What has changed on the Horizons of Drug Policy?

The next action taken was the release of an interview conducted with Morgana, the former Youth RISE Executive Director and this year also a candidate for Lithuania Parliament. Juana Banga / Young Wave then released an interview that was held with the Director of the Department of Tobacco, Drugs and Alcohol Control in Lithuania, taking their Support Don’t Punish campaign to those in control of the policies in government. 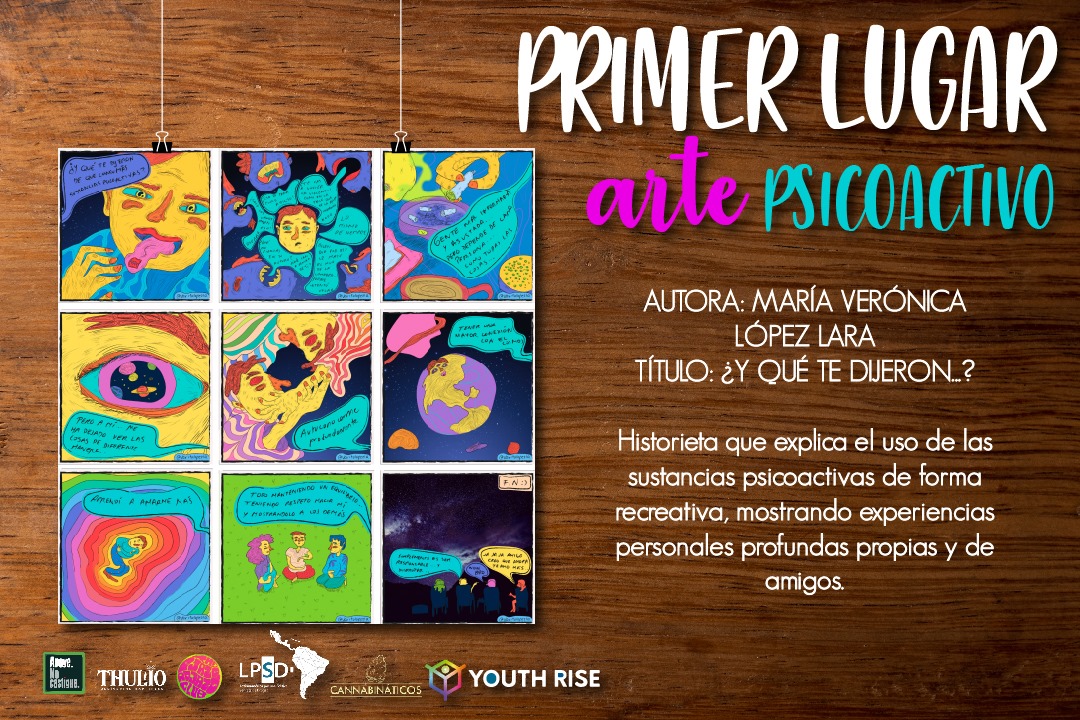 Our IWG Humberto at Latin América for a Sensible Drug Policy worked on a creativity campaign. The campaign, “Psychoactive Design Contest: Support Don’t Punish” was a regional illustration contest, which served to collect various forms of art across Latin America. Participants from all over the region submitted infographics, posters, comics, and graphic novels with a common goal: to raise awareness to harm reduction, drug policy, and human rights.

Young illustrators and graphic designers from all over Latin America participated in creating artwork that centered around risk reduction and respect for those who use psychoactive substances. The winners were announced on June 26, the Support, Don’t Punish Global Day of Action. The first place winner created a comic entitled “¿Y Qué Te Dijeron?”, that explained recreational use of psychoactive substances. The artwork was created with the intention of showing psychoactive drugs can create deep personal experiences.

Our IWG Carolina, through Intercambios Asociación Civil, conducted a number of online actions for Support Don’t Punish this year, with “Be in the distance” as the organisations motto for this year. They encouraged organisations across Argentina to record a video of them stating what is ‘in the distance’ to them, according to PWUD and harm reduction, they were sent more than 30 videos. They also consistently posted online about access to health care, arbitrary detention and institutional violence, human rights, drug policies, COVID-19 as an excuse for defunding harm reduction projects and centers for problematic consumption, and trans/youth/hiv+/homeless populations. On the Global Day of Action, Intercambios Asociación Civil published a document signed by the 70 organisations demanding for the reform of Argentina’s drug law, the self cultivation of cannabis for medical purposes and regulation for recreational use.

In Germany, our Executive Director Ailish Brennan, along with SSDP Berlin, organized a webinar titled Global Perspectives on Drug Policy Change Efforts, which included IWG representatives Carolina Ahumada from Argentina representing Intercambios AC and MJ Stowe from South Africa representing SANPUD. Joining MJ and Carolina was Nick Kent from SSDP Australia, a partner of ours from the Paradigma Coalition, as well as Julia Meisner from My Brain My Choice, a local movement calling for a change to the current drug policy regime in Germany and a move towards policies focused on the health of human rights of people who use drugs.

Share
Please be informed that cookies are being used on this site. By agreeing, click on the "I Agree" button or browse further. You can cancel your consent at any time by changing your Internet browser settings and deleting saved cookies. More detailed information is publicly disclosed in the Read More. I Agree